Picturing the Battle of Fishguard

The French invasion of Fishguard is perhaps the most colourful event in the long history of this small port town in Pembrokeshire.

On 22 February 1797, the locals in the area around Fishguard and the Pencaer Peninsula remarked that for a day in winter it was an uncommonly fine and warm morning. Little did they know that this day would be marked down in the history books less for the remarkable weather, but for a contingent of the French Légion Noire landing at Carreg Wastad point with the intent of invading Britain and trying to rouse a disaffected population to overthrow the king and establish a republic. Owing to the relative isolation of western Pembrokeshire and an unexpected display of patriotism by the local Welsh, the French invaders found their plans foiled and surrendered themselves on Goodwick Sands only two days later. 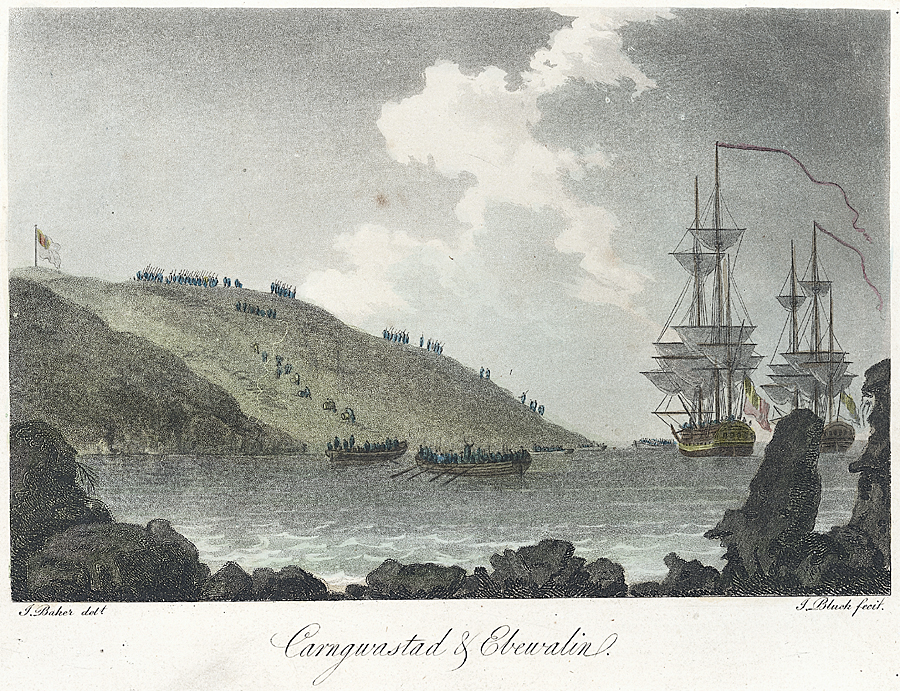 News of the event travelled only very slowly. By the time London heard of French armies landing in Britain, which caused a mild invasion panic among the population and even resulted in a financial crisis, the French soldiers had already been rounded up and distributed across the various local jails in Haverfordwest and Pembroke, while their commanding officer, the Irish-American William Tate, was transferred to London.

Although today this event is popularly referred to as ‘The Last Invasion of Britain’ and is commemorated in a beautifully rendered tapestry, there appear to be very few contemporary depictions of the events. This gallery combines some of these early and later images to try and capture some of the flavour of the locations and the people who were involved.

Picturing the Battle of Fishguard by Rita Singer. The story was originally published on Ports, Past and Present on 21 February 2022. is licensed under a Creative Commons Attribution-NonCommercial-ShareAlike 4.0 International License.

In Ports Past and Present

The Secrets Of The Welsh Coast | Britain By Beach | Channel 4

Heritage through the Lens

This site is part of Humanities Commons. Explore other sites on this network or register to build your own.
Terms of ServicePrivacy PolicyGuidelines for Participation